Lee Zlotoff spent last week visiting the cast and crew on the set of CBS’s MacGyver reboot of which he is an executive producer. He said it was good visit and “a chance for me to thank them for all their hard work on the show.”

Lee acknowledged that many fans of the original show were having difficulty adjusting to the new show, but reiterated that this was not a reflection of the cast or crew who are all working very hard and skillfully to bring this new show to life each week for us.

The MacGyver reboot premiered in September of last year where it achieved top ratings for the night and had the MacGyver hashtag  trending on twitter, a feat it has repeated several times since, while continuing to constantly score a spot on the Friday night ratings podium. Despite the top ratings there’s still no word from CBS on the chances of a second season as the show approaches the end of it’s first season.

For those of you who may not have in marked in your calendars, it is exactly 30 years ago this week that the first episode of MacGyver appeared on our TV sets. Not that I’ve been counting the days exactly but, there it is. Who even knew back then that Mac would still be around now, much less turn into a global meme and a part of our everyday vocabulary? (Again, in case you didn’t know, even the prestigious Oxford English Dictionary has just be-knighted ‘MacGyver’ as a bona fide verb. Probably because
we’ve all been using it as one for several decades. Still, nice that they made it official, no?)

And though I obviously encountered Mac myself sometime before he—and the inimitable Richard Dean Anderson—first took their bow on the stage of popular culture, perhaps it’s worth a few moments to consider this milestone for not only how and why we got to this point but where Mac might go from here.

As to how we got here, the answer is, I think, both simple and yet profound. Clearly,
something about this character struck a chord with, well, pretty much everybody. I mean,
the series has run continuously around the world for the past three decades—and still
does! I’m no whiz at math but that’s got to translate into billions of viewers, spanning
more than at least a generation, doesn’t it?

So was it that Mac didn’t use a gun? Or had the ingenuity and resourcefulness—and just
plain smarts—to solve the problem with whatever was at hand? Or that he somehow
managed to do all that while maintaining a sense of humor and humility? I guess, for the
simple answer, I’d say ‘all of the above’. And, for those of you who are interested in the
more profound version, I will re-post the MacGyver Global piece that I offered some
time back. Because, after giving it some serious consideration, I was as amazed and
surprised by Mac’s indelible impact as anyone.

But whatever the reason Mac’s still with us—and seemingly growing bigger by the
year—now we all get to ask the question, ‘what does it mean for a character like
MacGyver to turn 30?’

Well, at 30, most of us still have a good bit of life ahead of us. And, with all the new
Mac projects in the pipeline and on the drawing board—all of which will be revealed in
due course—I’d say the same of Mac. We’ve slowly but steadily been bringing
MacGyver out of hibernation and back to his rightful place on the world stage. First with
the new MacGyverGlobal.com website, followed by the comic book series, then the
graphic novel, then the mobile/app game, The MacGyver Method, and most recently with
The Next MacGyver global script competition. But trust me, those were just the
appetizers. There’s even more and better still to come.

Still, at 30, though we may be young and vibrant, we’re not exactly a kid anymore either.
Turning 30 is a moment to take stock, look around at the world–and at oneself—and ask
some real questions, like ‘what am I really about?’, ‘and what am I meant to be doing
with myself?’, ‘and is there something larger than me, like a bigger picture, that I should
be seeing?’.

And those questions can apply to Mac as well: what is MacGyver really about? What should he be doing now?, especially with all the changes in technology that have appeared in the last three decades, and ‘Is Mac now meant to be a part of something even larger than just himself?

So, as Mac’s creator, I’ve asked those questions. And here’s what I came up with.

As to what Mac’s really about, first and foremost Mac was, is and will always be about a good story. There are few better ways to engage the hearts and minds of the world than through entertainment. And, let’s face it, even when there were seemingly lives at stake, watching Mac has always been just great fun. And, if I have anything to say about it, that’s how it will continue to be. Though there are some serious challenges out there these days, the minute we take ourselves too seriously, I fear we become more a part of the problem than the solution. I don’t know, maybe it’s that humor and humility thing again.

But having fun doesn’t mean you can’t still be about something meaningful or important, does it? Look at all the lives that have been affected—if not actually saved—by emulating Mac and his approach to a problem: by stopping to fully consider what tools or resources you really have, and how to transform that into what you really need to deal with a problem. I’ve lost count of all the true stories that have come my way about someone invoking Mac to get themselves through a tough spot. And isn’t that something we’re all doing more and more to cope with the fluctuations in our economies, or our food, water, energy resources and so on?

And while I marvel at the stunning leaps and pirouettes of changing tech as much as we all do, it’s good to remember that all this new technology is awesome until, you know, it isn’t. When there’s a massive blackout, or the cell system gets overloaded by a storm or some other act of nature, does that simply render us all suddenly helpless? Would Mac be helpless then? I think not. So why should we?

Hence, even with all the advances in technology, having the wits and whereabouts to deal with an unexpected turn of events or a crisis seems just as relevant—if not more so—than it did 30 years ago. And I’ll just bet that it wouldn’t take you more than a few seconds to recall the last time you—or someone you know—had to MacGyver something. And called it just that.

So, if Mac’s meant to be doing anything now, reminding us that there’s probably a better way to tackle all the little challenges of everyday life is cause enough to keep him—and his approach—handy. Because our lives are rarely as predictable as we’d like and, well, stuff happens!

Finally then there’s the question if Mac is now in some way part of something even larger than himself? Well, like it or not, I think we’re now all part of something larger than ourselves. The fact is that we’ve had a global economy for at least the last 50 years, and with the introduction and integration of the internet, we are now all not only more wired together but more dependent on one another than anytime in human history. Add to that there are right now more people living on the planet than have ever lived—and died—in all of that same history, and with the increasing impact of climate change, there’s no escaping the reality that we are now a true global civilization.

This is it folks, good or bad, the bottom line is we are all in this together. And we’re all going to have to find a way to work together if this civilization is to survive through the new century. There is no longer any country, including America, that can claim to have all the resources it needs and that can hope to sustain its citizens without trading goods, information and new ways to address the issues we all face.

And, from where I sit, we need MacGyver—and his approach—more than ever. Because if we’re going to provide a decent life for our children, and their children and so on, we’ll all need to human up and get our individual and collective MacGyver on. Big time. We’re all going to need to learn how to put down our guns, turn what we have into what we need, and keep a sense of humor and humility if we hope to continue living on this precious little planet of ours. And if any character can help us get there, it’s not going to be Spiderman, or Batman, or the Avengers—much fun as they all are— but, in my humble opinion, it’s going to be MacGyver. Not because I created him, but because all of you have somehow recognized the truth and made Mac what he is, and not only because you like him, but because you all know we need him!

And I can’t think of a better 30th birthday present for a character than that. So thanks for not only taking Mac to your hearts, but for having the wisdom to see we should keep him around for at least the next 30 years…if not longer.

As part of the launch for ‘The Next MacGyver’ project, for which he is one of the key figures,  Lee Zlotoff talked to National Public Radio’s Michaeleen Doucleff about why he thinks this new project is important.

Listen to the news clip, read the article, view the transcript. 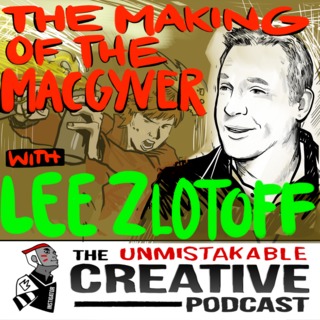 Lee Zlotoff talks about how his MacGyver Method works to engage the enormous capabilities of the subconscious mind to bear on effective problem solving as well as discussing his hit TV show and why it’s remained on air across the world for 30 years.

MacGyver creator Lee Zlotoff, discusses how he go into the entertainment industry, what’s new for MacGyver as well as talking about his Yurika Method and how it can help you MacGyver your way out of any situation.

If you recall from the last installment, I had just managed to navigate the Scylla and Charybdis of Henry Winkler and his alter ego, The Fonz, to be faced with concocting a suitable alternative to the ‘Hourglass’ concept that preserved the notion of a single-lead, action/adventure series.  Piece of cake, you’re thinking, right?

And I’d like to report that, having repaired to my office in Santa Monica, I cogitated for a brief period and—in a stunning epiphany—the concept of MacGyver in all his inimitable details simply sprang full-blown into my fertile mind.  That’s what I’d like to report, but no such luck I’m afraid because it took a good deal more than that for Mac to enter the world.
END_OF_DOCUMENT_TOKEN_TO_BE_REPLACED

MacGyver creator Lee David Zlotoff and Comic book writer Tony Lee will both be in-store to meet fans and do signings on Feb 13 between 7-8pm at Meltdown comics.

So if you’re in the LA area stop by and say Hi to them both.

The finished poster for the MacGyver signing at Meltdown comics! Art by Andie Tong, colours by Ciaran Lucas!